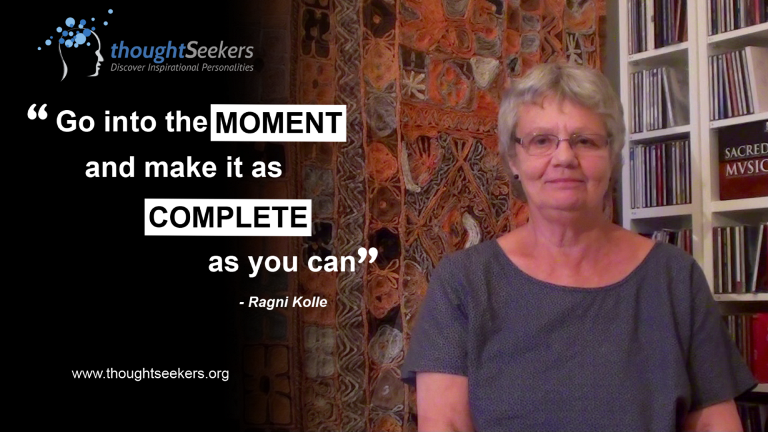 Describe the moment when you realized that church dancing is the thing you wanted to do?
That came very slowly, because it was through different church dancing occasions that I understood that this is really something that I was born to do. Something that I want to do. It felt it so relevant! Because I like to move myself. A famous Norwegian composer asked us to take part in an experimental service with all other students from Theology, under the supervision of a severe teacher. It became a big circus, but we performed it and afterwards it was a debate of months going on in the newspapers of what had been happening there. And the people that were there, that were present they were very positive. However people around us were only talking about it, they were against it. And then we repeated it 40 years after, with the same thing, and there was just happiness about it.

Did it affect you in any way that people who were not there were against it?
Not so much as we didn’t really understand what was going on, luckily. And afterwards it was so stupid because we had had so much positive reactions from those who were there. So we sort of survived. Because of that another composer was so fascinated by that, that he wrote a new piece of music for me. That’s a famous story about a woman that comes to beg on her knees to Christ to save her daughter who was mad. And the disciples said “get away”, “get rid of her” and she begs and she begs. After that Jesus says “Woman your faith is big” and her daughter got sane again in the very moment. And she gives her thanks to Jesus. So, Jesus gave me music so late because we were going to have a performance out on a famous museum, newly opened.

Why do you dance?
I started dancing because my mother always wanted to dance. So I started dancing very early. I went on and I did some exams of royal academy of dance but then I stopped. Well they told me I was up to examinations and they said you must do modern dancing and there was no modern dancing in Norway. But two years after in high school we got a teacher of gymnastics. Because she said I don’t do gymnastics, I just do this sort of dancing. That was the answer for me. She made me do also to improvisations and she established contact with composers again. That was the beginning.

I knew this I always felt very stupid when I was doing Belle. But this was my language. I sort of managed to express things that I never been able to express in other ways. It was this thought, this abstract view, where you are not telling a story, but yet you do. You don’t do it in a literal way! You do it with your body and all to express feelings. But, as I said it was despite myself, because I did studies, languages at University, I taught in a school. I was moving all around Europe because of my former husband. And I got two children, too. I said this is my life. I started in ‘76 with and I continued regularly afterwards.

What keeps you motivated?
I think it was that I really had a language to speak with more than words. I have been reading and learning languages, but this was my way of expression all along. I could express all these dynamics that were inside me with dancing. Dancing helped get over a psychological breakdown.

How does dancing make you feel?
It helps me focus. I only have one target: to say what is going on inside me. I can’t explain in other words.

Do people understand your language? Do they know?
Well, I have had the experience that people love when I dance. They are engaged. The response has been very positive that I must say.

What made you continue dancing even while some people were against it?
There were so many positive messages I received. From the composers that insisted, from the priests that wanted it. I am just a messenger, transmitting something to people. It helps that I am serious, dedicated. I am not there just to entertain, I am there to communicate a message, and that is important!

Which was the best moment you had while dancing?
I know one moment: we performed with a choir in a place where it was a lot of work to get accepted and my challenge was that I got a prolapsed disk on the back one hour before. A neurologist came to look at me and he said if you can walk you can dance. But he didn’t know that I was using a big staircase, like that where the guy is singing. And I was rolling down, I was all over the place. So I had to leave that dance. Only the music was played. But afterwards I performed the rest, since it was all in my feet. I then realized the strong response of the people watching me. The show was delayed for an hour, since the doctor came to see me, but after the silence and the goodwill of the audience, the response was so strong. They were sort of lifting me through the dance. And the reactions were very good afterwards. Afterwards when I toured all of the other countries, we had 20 or so performances. And I do these shows also in Faroe Islands, because there was also a big fuss before.

What was so unique about dancing in a church?
It has always been much more important for me to dance on a scene. I don’t know why. I have been dancing on scenes a lot. And in different circumstances choreographing for other theatres. But I feel that it touches me even more, when I am dancing in a church. Because I am talking with God. I am trying to convey what he has said in the Bible my way. My way of saying it. I felt it more important on being on a scene. I don’t know why, but I had good experience on that scene as well.

Were there other feelings dancing on a stage than dancing on a church?
Yes, but it is difficult to say. I think it’s not just you performing for being good. I think you are performing for something higher than yourself. Something more important than yourself. It’s not me that is important, it’s the whole thing, more than on a scene because then you are acting or dancing for an audience. But I must say I have danced alone most of the time in churches, although I had friends, choreographers together in some cases. Both worlds are great. It’s just that two different worlds. But my language is the same.

Nobody did the church dance before you so what’s the change afterwards?
Now it’s not common, but it is accepted almost everywhere. And there is no fuss about it. That’s the difference.

How did it feel to dance in the church in the beginning?
Oh! I was really afraid. But I had support and never has it been so full, than in these two churches! And they were big churches. So there were so many people there! It was very strange. And then the support of the actors. They were students like me because this was when we were studying. But I have always thought I would never be a dancer. It came to me all the time. I was asked, I didn’t go out and ask. They came to me. So I had this opportunity that the dance came to me.

Why did you accept it when they asked you to dance in the church and didn’t say no?
I think because I had some sort a relation before. After my confirmation when I was 15 or something. It was very important for me. I felt good inside the church. I have felt it right in the church. It was natural that when I was asked I was “yes, I want to do this”. It was not for doing a something special. I didn’t think of it. I did know that that was the first one. I knew there was a big choreographer in Sweden. Who had done something like biblical dances. He had not been allowed in Sweden to dance it. Not been allowed in church, not been allowed in Norway. I was the first.

Do you feel you have done the right thing?

Yes, but it has taken me a long time to be convinced that this was my way in life. But now I know that it was the right thing.

How did you get convinced?
Jus by doing it. I had been teaching and I loved to have pupils and relationships with people. And I used all myself when I danced. I did not want any other way. And I felt that I communicated with them through dance. And they were listening to me.

If there was another one dancing, could you have talked with them through dancing?
Yeah! I have done that. We were dancing the five bad virgins that not have oil on their lamps. We were sort of taking out our frustration and agony that we were thrown out by Jesus. So all these stories from Bible and all the stories that Jesus told, that are strong in a very simple way. That’s why I dance because I don’t find voice for it.

Was there a point where you felt like NO this may not be a right thing to do?
No, but I got to the high school where Jardar worked. I took a sort of exam for teaching pupils. But then we made a program to teach dance at the school. I was engaged in that. But I am too old to start teaching now. So I said no and afterwards. And we thought it was finished. Younger dancers took the job. I was asked to do these books, so I didn’t dance for some years. Well I did once at the theatre in Norway with the theme from a novel. I performed my last dance in 2007. Because then we repeated this first dance of this controversial experimental worship that was in 1967 and 2007. My dancing colleague was 5 years older than me and I was old.