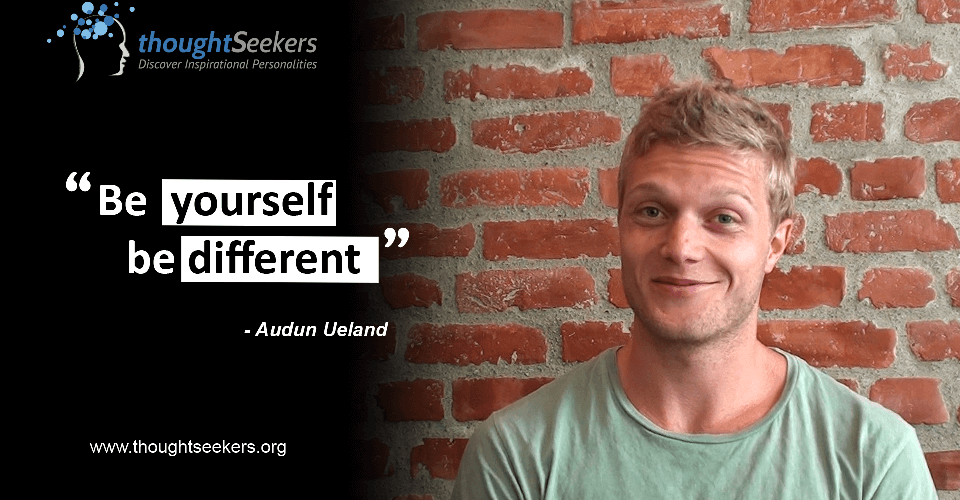 Who are you and what do you do?

I started in companies before and the company that I am working in now is my third start up. I am a civil engineer. My first start up was a recruiting company. My second startup was a travel bag for baby’s strollers. And the company I’m starting now so far is an incubator for entrepreneurs in Norway.

How did you come to the idea to found an incubator for entrepreneurs?

I started wondering how come. Together with my co-founder we thought a lot about how things could be better, how the infrastructure for entrepreneurs could be better in Norway especially for young modern entrepreneurs our age. Things weren’t really adapted to our needs. So basically when we sold our last company, we decided that this is going to be our next project.

We traveled around the world to visit entrepreneurial hubs like Berlin, London, the Silicon Valley, New York, etc. To learn and experience and see what kind of services, networks, hubs co-working spaces, incubators they have there.

After that we went back to Norway and found a place, the big place we are now in, and rented it and opened the doors for the entrepreneurial community in Norway. There was nothing like this here when we started so it became popular very fast. And now we are finding ourselves to reopen. We’re a 120 entrepreneurs here and a lot of cool stuff is going on.

Is this the biggest achievement of your life?

I don’t know. The exit from my last company was really cool and I would say a big achievement for me. It’s the first real exit I had and I earned some money from it and I learned a lot from the start up itself.

I would say that the ambitions that we have for this startup are bigger and or more in line with our passions and what we really want to do something about. Even though we’ve come far in these five months since we started we’re going to do a lot more. So we don’t really feel that we are at all near where we are going to be. So it doesn’t really feel like a big achievement yet. So wait a couple of years and then ask me again!

What was your 2nd company about?

It was a travel bag for baby’s strollers. Basically when moms and dads, parents, travel with their babies and bring their baby’s strollers in the airplanes, they tend to get broken very often. It wasn’t our idea. We don’t have children but we started the company, me and my friend together with a mom who had experienced this problem. It’s a very niche product but it was a good product and actually a revolutionary product in that niche so it sold very well.

What is your biggest failure in business up to now?

The first company that we started I would say in a way was a failure and that we had to shut it down. What happened was, it was a recruiting company so what we did was we collected all the best students at our university in their database. Then they were registered with their grades and what they were studying, how old they were, what experience they had, which gender they were, etc. And this was just before the financial crisis so the company spent a lot of money trying to recruit students. So it’s a big, validated market for those kinds of things.

What we did was that we gathered all the students and we went to the companies and we told them, ” you can pick which kind of students you want to meet and we’ll get the students for you.” And instead of representing for 300 students paying for food and snacks and all that, you get actually 25 students that you know that they really want to work in your company.

We arranged dinners with the students and the company, intimate dinners, where they can select between what kinds of students they want. And of course we charged a high fee for this. And we got a pilot customer. Everything was planned and 2 days before the dinner, there was a slightly negatively angled article about our company in the student newspaper. The reason being all the sororities and fraternities which felt that were kind of our competitors.

We hadn’t really thought that much about them being our competitors. We hadn’t talked that much to them so kind of like a negative attitude towards what we were doing had been built with time among them. I didn’t really think it was going to be a problem but when the pilot company saw this article they got cold feet and pulled out, which now, in retrospect, I understand.

Even though it was a failure, we weren’t really sad because we learned a lot. It was fun. We knew that we wanted to continue with entrepreneurship.

The first start-up failed. The second one was very successful. The third business is not about profits that much, what is it about?

Starting a company is really challenging on many different levels. It was about how we worked, how we actually managed to succeed or even though we didn’t succeed, how much we learned. All those factors are really, really important motivators for us. And also working together as good friends, sharing this incredible challenge and seeing progress.

The difference between the previous 2 companies and this start up is that for example with that travel bag for baby strollers, I never had a passion for baby products. That’s not the reason why I started the company. It was because it was an opportunity that came up and I knew that I liked the challenges of starting a company. There were two really, really good co-founders that I could join. Everything was kind of perfect except for it wasn’t my passion.

But now, after we’ve succeeded with the second company and have some money and also some credibility, it’s a lot easier to pick what you want to do, your true passion, right? So we’re more free now to be able to choose what we want to do. Because when you start something, it’s really important to get people to believe in you. You need investors maybe. We don’t have investors now but we have some backing from the government, for example, that we wouldn’t have gotten if we hadn’t had something to show that we succeed before.

What we’re doing now really is a hundred percent in line with what we want to work with and it’s more anchored and meaningful for us.

Why did you start a co-working space?

In our society today, we feel that especially in our country, we don’t know much about outside of Norway, and especially in Norway, most people have the tendency to kind of drown their passions and instead of pursuing them, people think it’s scary to do something that’s different.

Acceptance of everyone else is very, very important. I think that’s a basic need for everyone, to be accepted and to fit in. But we feel that a lot of people fit in, try to fit it, try not to be different because they’re afraid of being different. That makes them not follow their passions and not develop the skills that they have actually.

We also feel that people who feel new stuff, people who see problems and try to do something about them often are the same types of people who dare to be different, right? Because when you do something that’s a little bit different, you challenge status quo and in order to do that, you need to be at least a little tough.

You need to be able to say, “Okay, I see this problem. I see that everyone is doing it this way. I’ll do it that way, another way.” And by that, you are differentiating yourself from the masses and that’s a little bit scary. But you’re more true to yourself and it doesn’t have to be entrepreneurship that you’re doing. You can innovate in art, you can innovate in science, you can innovate in many different ways.

We want to help them succeed and we also want to lower the barriers for those people who can potentially become entrepreneurs. We want to make it safer, more fun, and easier to start a company and also more respected, safer and cooler so that more people than today can be themselves and follow their passions and that way move the world forward.

What is the biggest motivation for you right now?

I learn a lot and learning in itself is a motivator for me. In addition to learning a lot of stuff, doing something that I also think is meaningful is great. It’s kind of like a bonus, an important bonus.

Because even though I started up, there was no real meaning for me, making a new travel bag baby stroller is not really meaningful. So what I got out of that was working together with two really good friends. I got a lot of motivation from that. I learn about myself, my strengths, where my weaknesses are. All those little things from the entrepreneurship experience motivate me.

Another very important aspect in this startup is how I see every day that what we do is helping so many people to succeed with their startups. I see everyday people meet other people, and they learn. They participate in events. I see that the place that we’ve ceated is really an important factor and helping these people succeeding and having more fun and finding meaning in their work.

What is the biggest challenge right now in this project?

Well I would say the biggest challenge is making sure we are financially sustainable. So far our business model is not sustainable. We’re kind of dependent on the grants that we’re getting from the government and our own investments. Even though you’re full and all the entrepreneurs are paying the rent, we have cheap prices and you need to kind of improve or change or find a new business model as we go along in order to keep it sustainable, right?

We’re seeing that we’re delivering so much value to the entrepreneurs that we’re pretty confident that we will find a good business model. We have several alternatives in our minds, kind of juggling around and seeing what’s what. I can say that it’s a big challenge. There are so many challenges. It’s really hard to pick out the biggest one, but that’s what’s so fun, right?

What would you do currently in this world where you live, to optimize or to make it a better place for all of us?

I feel that the values in our society today where I live and many of them are not as they should be because they make people conformed instead of being themselves. For example, in Norway fitting in, being like everyone else and not trying to be better than everyone else or different, that’s a typical Norwegian value.

I think that the prerequisite to be happy is to be yourself. It’s not trying, not defining yourself in the eyes of others and trying to be as you think others would want you to be or the society tells you to be, right? It’s about you being you, that’s all.

There are 100 million people there as followers, what would you say to them?

Be yourself. Be different! 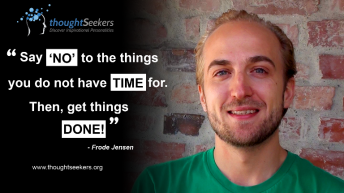