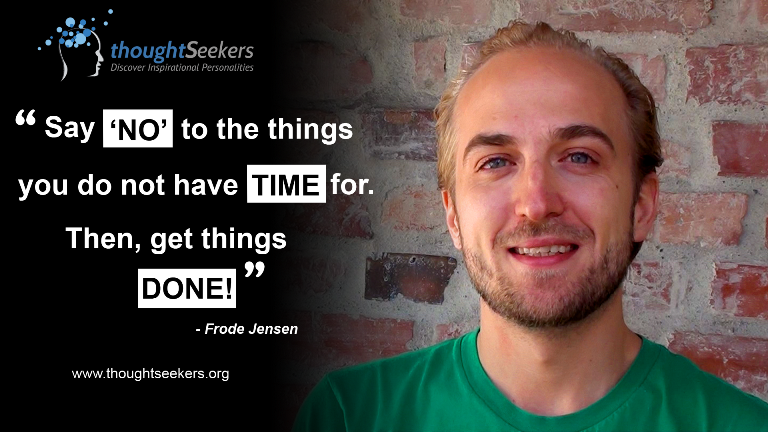 Frode Jensen, thoughtSeeker
He lives in Norway.
We met during our thoughtTrip towards the North Cape in 2012.

Who are you and what do you do?
My name is Frode Jensen and I’ve been studying computer science. I’ve grown up with computers since I was 6 years old and felt in love with technology. I’ve been working in Germany for 4 years after my studies for a start-up company there. When I moved back to Norway I didn’t want to join any company so I was a freelancer while trying to figure out what was going on in Norway. And during that time I figured out that life is too short to work in a boring company. That’s what we are trying to do with our project; we’re trying to build a community for people who want to start their own technology companies.

When you came back to Norway why didn’t you want to work in a company?
When I came back from Germany I tried to figure out what companies were out there, where to work and while I was freelancing, I figured out that life is too short to work in a boring company. So that’s when I started arranging start-up weekends. We have been doing that for two years now. Start-up weekend is an event where you can get people together to work on ideas, and to move them from ideas to business concepts.

While doing the start-up weekend we figured out more needs for the start-up community. So we started doing open coffees, we had the Christmas party for entrepreneurs and freelancers and things like this, trying to build a community together.

Now we are building a company StartupNorway, with the goal to bring all entrepreneurs in Norway to get them together to make a stronger community. To focus more on the really great companies that are out there and about which nobody knows. This isn’t written in any normal press. We try to profile small companies and technology start-ups as a good choice for students for example instead of them having a top list of what companies they want to work for, which is now things like KPMG, Stat Oil or this kind of companies. We want them to really think about the fact that they can start their own companies or join other start-ups.

How did you choose the entrepreneurial path?
I have a degree entitled innovation and entrepreneurship. I guess that’s where it started a little bit. It was not really about starting a company but working with innovation. When I was in Germany I worked in a company that was already six years old. But it still felt like a start-up company. The culture was really in that way that you can do whatever as long as you have a good reason for it. They really liked empowering everybody to just do right things. And I felt this part of the start-up culture not being part of the bureaucracy, like, for example: strict working flows or filling out forms. There was where I also hung out with a lot of people working in the start-up scene.

Why is it a passion?

There are too many big boring companies which don’t really innovate.

The quote goes “Big companies don’t succeed by being better than other ones, they succeed by sucking less than other companies”. So I really think if you want to do the best, you need to be a small company with a focus. And bring out the best in everybody.

What motivates you?
The motivation comes from all of the feedback you get from the people who attended the start-up weekend and say that it really changed their lifes in terms of how they think about work. And what they want to do. It comes from people realizing that there are alternatives. And the great feedback after highlighting a cool company, a company that nobody knew about and which is doing amazing things.

What were your successes until now?
We have one grand example here in Oslo, it’s a cool sound graph which two technology guys started making a prototype at the start-up weekend, for a jukebox where you can vote with your mobile phone on what should be played next, in a bar for example. So they made a prototype, took it to the bar on Sunday. People could vote for what music was playing. Out from the start-up weekend they also met the one who have become their CEO. The CEO changed its angle and they are now the app called spotify. They got an investment from north zone and they are doing great.

What is your motivation in life? What do you live for?

I live in order to get things done.

For me life should be something grand and technology is what I know the best. So that’s why I work, that’s what I want to do. Technology will be part of saving the world and humanity if we manage to. I think we are able to change everything in terms of pollution, in terms of damaging the world. And this is possible with the help of technology.

Where do you get the power to do your work?
From where I get my energy is how interesting is the project I do and if I get positive feedback from other people. That I get to work with the things that I know about a lot. And I need to have a choice. I need to know that I can go to the skiing cabin in the mountains if I want to, that I can work during the week-end or that I can sleep one day long if I want to, that it’s my choice.

What was your biggest challenge until now?
Time! Time is always the biggest challenge. There is so much you would like to do so you have to focus. There’s a lot of personal challenges ofcourse. For me it’s my family as well. Everything can be overcome but keeping the focus I would say is the biggest challenge for me. And if you ask my friends I don’t solve it really well. I work a bit too much at the moment. I guess starting saying NO would be a good start. Saying no to the things that you don’t have time for and taking the time for things that you want to spend your time on.

What is your message for the viewers?
With start-up Norway we are trying to both build a community for technology entrepreneurs and also make entrepreneurship more known to the press. Like get the press to write more about cool things that are happening. Trying to get students and employees in bigger companies to see that entrepreneurship and technology startups is a viable way to go too, instead of joining a big company.

If you are to die today, what would you like to leave behind?
What I can leave behind if I die today is the idea that you can do something more with your life than being part of a big machinery. At least think about what you are doing that you really enjoy. I also hope that I touched some people in this way with my work.