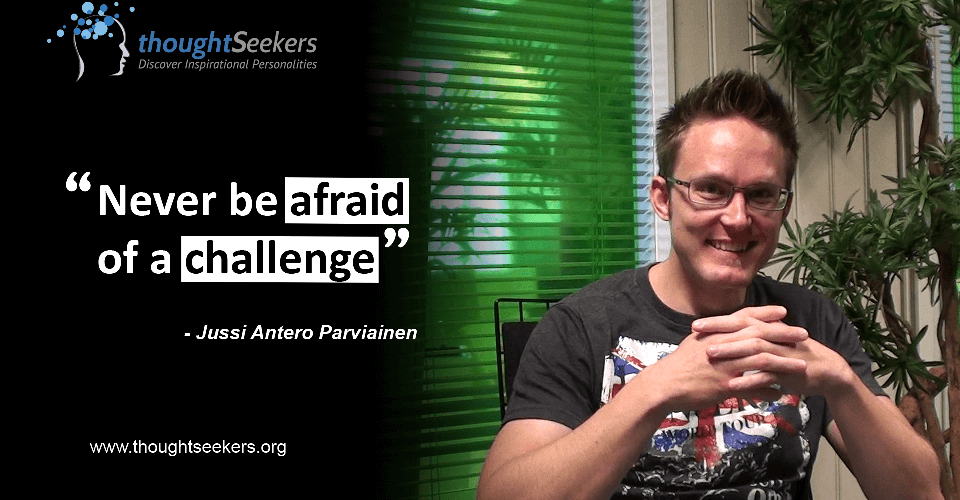 Tell me about yourself.

My name is Jussi Parviainen. I was born in Tampere. I am 30 years old right now. My latest education is entrepreneurship school. Before that I was actually about 8 years working in a bakery. I came to the Hub about when it was found two and a half years ago. I am not a founder but I own a part of it and I just love being an entrepreneur.

What motivated you to switch from the bakery to co-founding the Hub?

I felt that there was nothing more for me to learn or give to the job I was doing and I needed to have some change, some dramatic change in my life, if you will. And I just felt like: well ok, first I go to school. That was a bit of an accident actually. And then in school I learned it by my heart. I am an entrepreneur. I am person who wants to create new things.

I would say the year 2005, about January 2005, I was still in the bakery. I remember it was 4 a.m. Or something like that and I was doing this my job in there. I remember that I was just like,

“There’s gotta be more than this to life.”

And that was it. The process of changing from bakery to entrepreneurship world started at that exact moment. That was the exact moment that I felt like I had given everything I’ve got to that particular job and I knew that I couldn’t learn anymore from that. I wanted to learn more. I wanted to show that there’s more of me to give to this world. That was it.

How did you come to the idea of founding the Hub?

Like I said, I’ve graduated from entrepreneurship school and actually the girl who was behind the whole idea of Hub Tampere was my teammate. I would say it was a series of extraordinary circumstances that led first, her to found the Hub Tampere then contact me to become like one of the core team members. I guess some things just happen.

What were the biggest challenges you encountered?

Changing the general atmosphere in Finland since this kind of concept was new, it was the first, actually. Plus it’s a foreign concept. It’s not originating from Finland. It’s from Great Britain. Changing the general atmosphere in Finland, teaching people it’s the future. That you can work together in open space. That you will be co workers per se. We have always been very extroverted here. We like to laugh. We like to do crazy things. That’s not the general idea of how business should be done in Finland. So those have been little challenges in kind of teaching that this is the new way of doing business.

So the challenge was to change the general mentality trend in Finland and to adapt it so that more people can come and work here. How hard was it to do?

I’d say we got a lot of help from the media because the media became very interested in this concept. The print, the radio the television became very interested. It started the general drum as you say. It started to expand. It could have been harder but it could’ve been easier too. I’d say we are somewhere past the middle phase but not quite there yet with the challenge.

What motivated you and motivates you still to go further and not to say, “Okay the mentality is too hard for me to change and I think I’ll give up?”

What are you striving for?

What do you believe about people in Finland or maybe people in the world in general? What should they change so that the world works in a better place to live in?

I think everyone of us could be a little less selfish than we are right now. It’s going on a better direction all together but there’s still work to do. I’m not a world healer person in that sense, but taking responsibility of yourself and others as well but yourself firstly. Oh and one critical aspect: to really follow what you want to do in life, what you want to achieve in life. Don’t pay too much attention to the expectations of others, about how you should be and what you should do. Trust your instincts. Trust the thing that you believe in and work for it.

Sometimes you have the thing and you start working for it but some challenges come to you and it’s like so hard and everyone is fighting against it. What do you do then?

Failing is natural. A lot of people in the entertainment industry are saying that success is falling down 9 times and getting up ten times. It’s the one time that counts. And there’s really no easy way to success, in my opinion. Believing in yourself, believing in your own core values, and believing in what you want to do, that’s the important thing because if you do, if you are loyal to what you believe in, then the challenges and the failure become easier to cope with. Not only is there a good chance, it’s natural that road leads to the life that you want to live.

What motivated you to overcome these challenges?

I’m doing what I really want to do. I’ve set myself some goals, very personal for that matter. I have this will to show the world I can. I wouldn’t say I’m egotistic in that sense but I want to show people that that were me but even better that was us. We did that.

What are your personal goals?

I know this sounds corny but I’m saying on a very general level: to stay loyal to my values and live my life the way I want to live it. That includes being very healthy in physical sense and being healthy in mental sense, take care of my well being in every possible way, to create new things, set up new businesses in grow this one, explore life, to be an adventure of life if you want.

On a general level, to live a fulfilling life but on a more precise level, to keep myself in the most absolute physical shape, to keep my mind in absolute best shape. It can be meaning that I want to learn, create new things, read, write, I want to share my thoughts. To grow this business obviously. To set up new businesses. To make more adventures like I have done in the past. To be an explorer of life.

Why is it necessary to be in a physical good shape?

You said before that your personal goal is to live your life according to your own principles, which are those principles?

To respect yourself and others, to never be afraid of a challenge even though it might seem impossible at first, to work hard whenever that opportunity comes.

Where do you get your power from to go further?

Physical training. I love writing. I write a lot of stuff. I write a blog. I wrote a book that has never been published because I don’t want it to be published, at least not now, thinking things, making notes about the world around me, learning from myself, from other people and how the world turns.

Why do you want to develop and to further?

In a way, I think that’s kind of like the meaning of life. You can edit that out if you want. I think there is some purpose for us all to be here. I think, for me, it is to develop and to further. Explore. Challenge yourself and fail once or twice and then get up and go on again.

How do you overcome getting tired?

It’s just training your brain. It’s ok to be tired. It’s natural but as long as you always go to the gym even though you would have a week off or something. You can do like this as long as you get back to that. Just mental training.

How do you train your brain for these challenges?

It’s on a daily basis. For example I have my goals on my screen saver on my desktop, you know, the background image. I have set up my smartphone and my computer and the things at home so that I can’t escape from the image of the goal. Everything I do reminds me of that particular goal. I kind of bumped into it many times a day. It becomes a natural part of my thinking.

If you’re going to say some last words to people who are going to watch this video, like as a final message, if there were 1 million people watching this video, what would you like to tell them?

If there is one thing in life that you need to do, do the thing that you believe in the most. There is nothing valuable in this life than to be loyal to what you really truly want from life. And I think being an entrepreneur is a great tool to do that. 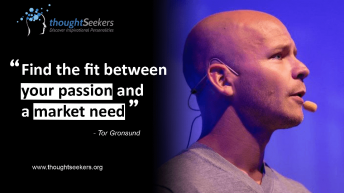