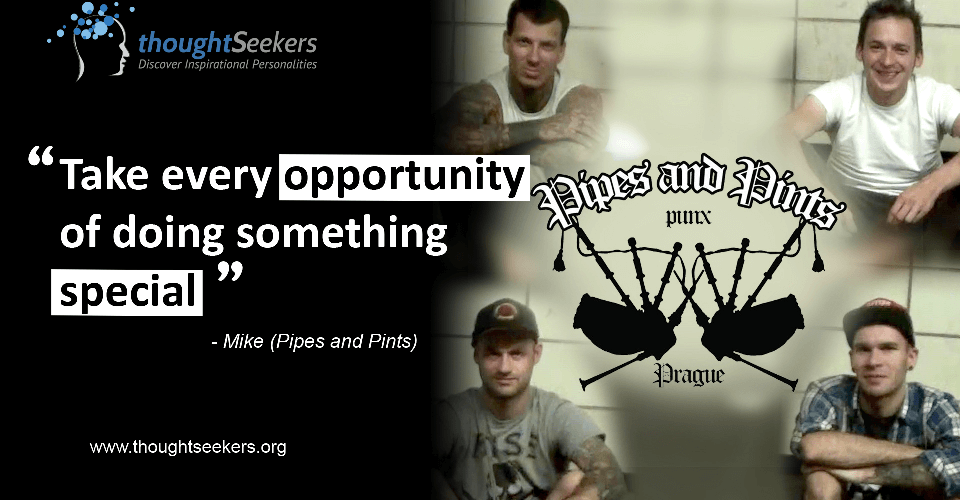 How Punk and Pipes revolutionized music in Czech Republic

What is your band all about and what are you doing in the band?

Tomas: I play guitar. I try to organize song composing, writing, whatever is a part of it. I try to be the supervisor of everybody’s steps. Those are all my functions. Then we all try to be part of the vocals, as far as our abilities allow us to. But we try our best to be as much part of the music as possible. Generally we play punk rock and sometimes bagpipes. Some people call it funk or Irish but usually we try to stay away from it because except bagpipes there is no connection between Irish or Scottish and folk background. We keep it straight as punk rock music. That’s all we are from and we listen to only.

We started in 2006 with Vojta who is the only one not present here in interview. We started with his idea first. He began the project with bagpipes and then made it like a band. And it is really working. For some time we tried to co-operate with other musicians but we failed. Then we met some friends along the way and restarted working together for few months. That’s how we added more musician friends. Which was working for a few months (like six months) and failed again, this time because our opinions about the band and the direction in which should we go did not coincide. That brought us to Vojta, to start all over and we kicked off other members. We decided to find musicians, people who wanted to get the band somewhere, really. It happened in Czech Republic. We started looking for members straight with these requirements and you see, we want to do it as full time, all time not as a project. So we tried to find the guys who fit the requirements. We we are in this line up, as a band, for 4 years.

When was the point when you realized that this is it?

I don’t know if we can call a definite point. Definitely it was a great kick. It was Mike who was singing and writing lyrics, who decided to join to us. It was when Mike left his own band to join us, and we made a lead for him with Vojta. There were other differences too, because, when we asked Mike to join us, we split out lineup. Not to mention we left for Vienna at that time. When we started practicing, in this formula, from the first minutes, we knew we will b doing this. Right now we have about 25 songs and a record release. A CD is finished, we finished it yesterday and in a Sweden festival we met with one of the bosses of IQ Records, which is one of the biggest European records brand. He offered to release our CD on their label. This is a great success for us!

Tomas, why do you play punk?

I think there are so many music genres but in punk I think we can put most of our emotions and all the energy that we have. We can all play other genres but punk stays straight, true. Punk is an honest attitude for us. All I can say is this is the simplest and straightest thing for us.

Mike, why do you play punk?

I started like 20 years ago with punk bands. I just couldn’t stop doing it. I really enjoyed it and I think the biggest change with me is playing with this band pipes and pints. Especially since we started low and now we are rising high, really fast. Ondra, Vincour and I joined this band. The fascinating thing about it is that each one of us has a different kind of vibe, of music. It is because everybody listens something else. This makes this band so unique. It makes it really good. That’s why I like to play punk rock in this band.

Tomas, why does Mike said that your band grew like that?

I don’t think if we can recall something specific. I think nowadays no other band in punk rock plays it like this. Other guys just play this and that, but don’t put full effort in punk rock in full throttle. What we do different is we try to break this pattern. We don’t think of the band as a secondary project. We put all our efforts as a first priority.

Mike: To answer that I can say that we try to keep everything real. Keep our music real. It comes from the heart. All of us play from the heart. The lyrics have to be real. It’s important that all of us want it not just one of us. We push each other to the limit for this.

Ondra: We think there is nothing that can push us down. Whatever we do, we just do it without any hangovers or accidents. We try to do the best.

What makes you successful?

Vincour: I think we have a big energy on the stage.

Tomas: It’s a priority thing. It’s obvious! If you see us, you can see we do it as our top priority. I think that’s what makes us successful here in Czech Republic.

Ondra: I think there are two things. One is the fact that our music is good. Our band is my favorite band. And I love to play these songs. We feel our songs and we enjoy our music and we enjoy each one’s part. We have fun and enjoy our performance and people told me that this is different than other bands. Other bands just play it like they are doing some kind of job or like they must do it. We are just happy to do it, so people feel this from us and they love it.

Mike: I think they feel a lot of energy when we play. Because we try to bring over each word, each lyric, each song all the way. They party with us, they rock with us. Sometimes it’s hard as it’s a hard crowd but most of the time it’s full on, with full energy.

Where did you get your energy to do what you are doing?

Mike: The lyrics and the music bring me energy. And the same thing goes for the bass, the guitar and drums. When I watch them play they are totally into what they are doing. People think they are just having fun and all but I know, I realize how they enjoy their instruments. That is what makes the energy so strong.

If there are no fans and your gig is empty, do you still play?

Ondra: Yeah, it’s what I said before, because we love the music! So it does not matter how you feel, maybe seeing a though crowd. It matters when you start to do it, when you know this is the thing you like. When I played in other bands I did not enjoy the music that much. However, here, I will not enjoy it, whether there are a thousand people or zero.

What was your biggest challenge until now within the band?

Tomas: I think it might be our decision to put our efforts in this job. We all left our jobs for this band. Because we thought we were not doing the thing we love to.

Mike: There’s always going to be the sacrifices involved, like the fact that you have to let go of relationships and all.

Tomas: One of the challenges was one year ago, when Mike decided to leave the band. Because of this, our “functional family” was turned upside down. We spent one month and two weeks in Russia and the days after we spent in Europe. Then we spent two weeks in England. There was a big pressure on us and somehow Mike decided to leave the band. We finished the summer festivals last year and Mike left and then we’ve been looking for a new singer 2-3 months. We got a guy coming over from the US trying to sing. From a distance everything seemed like it could work. But again face to face, there was no chemistry. We all missed Mike and Mike missed us.

How do you see life in general?

Tomas: I feel like everybody is chained with something for 60, 70, 80 years. So we try to lose that chain and run.

Tomas: We try to move, to keep forward, to make some progress in it. You don’t finish if you finish school! I know plenty of people who finished school, got steady jobs that’s the reason they’re looking forward to weekends.  But we tried to stay away from this and aimed for something higher. This is higher for us, of course, but for somebody else this could be the worst thing. It is high for us maybe because not anybody can do it. May be it’s a wrong opinion but for us it’s like: if nobody else can do it we have a chance to do it. And when we get feedback from the fans and we know they appreciate it when they see what we do, we love it more. Our relationships, jobs, lives may suffer, but it still worth it.

Ondra: I think it is excellent. I think I have a beautiful and amazing life. It is excellent because I think we feel a lot of freedom in it. It is about the challenges and the excitement that comes from challenges.

If your life ends today, what would you like to leave behind you?

Mike: I think I just like to be remembered as an amazing punk rock singer. That’s it. And also for my family, love and kids.

Tomas: For me it would be cool if it stays like a message for the people living after us that nothing is impossible. Before, it seemed unlikely to be successful in punk rock music in Czech Republic, now it’s not. So I would be happier if we send this message: continue if you believe in something!

Message for the audience?

Ondra: Enjoy your life don’t miss the challenges and chances!

Mike: I think it is most important to learn, don’t sit around, don’t waste it. Take every opportunity of doing something special. Don’t think too much about it, just do it!

Ondra: Think about it like this: go to your target but also focus on the way to your target. You can change your mind on the way. Not losing the way is the most important stuff. A lot of people say I want this and they get there, but with their eyes closed, missing all the life on the way.

Vincour: When you believe in something anything is possible.