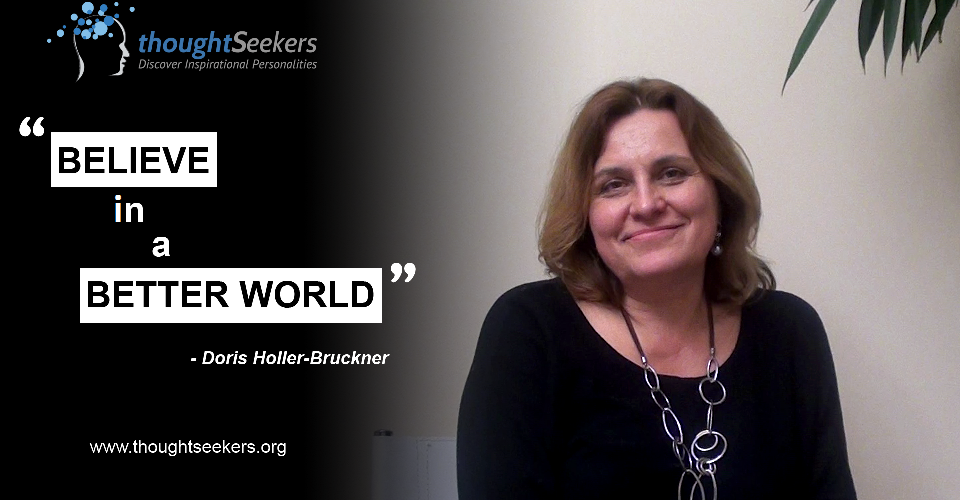 Doris Holler-Bruckner transforms our world in a more sustainable one, piece by piece

Doris Holler-Bruckner, thoughtSeeker
She lives in Vienna, Austria.
We first met in 2012, when she was filming her documentary on renewable energies.

Tell us something about yourself
A very important moment in my life was sitting on the side of the Danube River near Vienna about 25 years ago, in 1984, when I was a student. I remember it was very cold, in the winter. My colleagues and I were protesting against the big water plant which was about to be constructed on the Danube River near Vienna.

It was then, when I realized that we can change the world together when we work together.

It was very important for me that so many persons were there, it was a big movement which we started back then.

I started a few projects working together with people in order to change things. Only if you work together you can inform and change the mind of other persons, influence political decisions, you can change the world in the end. I was involved in defending a national park in the region of Vienna, a volunteering project spreading over a few years.

While being involved in environmental projects, I realized I had to earn my living and also get a paid job, not only to volunteer. Therefore we started a company to build ecological buildings. It was during this time when we started also ökonews, the first digital, daily newspaper for renewable energy, sustainability and sustainable projects. In the meantime, it is the biggest web platform in Austria of its kind. Our aim was to build a network of people who are working with the goal to provide renewable energy. It was important for us to bring these people together not only on the internet but also on offline projects.

How did you come to the idea to establish ökonews?
The idea of ökonews came from my colleague Lukas. Back then, I was working during my student time as a journalist. So he asked me if I would like to do the project with him. And I said yes, I thought it’s a great idea but alone we couldn’t do it.

So we went searching for other people who wanted to work with us. There were 4 of us who started. I did marketing and external relations. Martin and Lukas were more on the tech side. Lukas programmed the web portal and did the research before we started, in order to know if it’s possible to do something like this in Austria. Herbert did the advertising part.

Then we looked how we can find other persons and also some companies which have the same goals to change the energy system. We wanted to add new articles every day and also on Sundays. At first we did not know if it worked or not, whether people liked it or not. One of our goals was also to find good case practice projects which prove that environmentally friendly projects are feasible, projects which have enough energy from renewable sources and don’t need any fossil fuels.

Our team’s goal is to have 100% renewable energy in the world in the future, starting with Austria.

We are sure that this will work and it is possible. Meanwhile we have about 20 persons which are working as volunteers for ökonews.

What were the main challenges throughout the implementation of ökonews?
The main challenge was to see if ökonews is feasible; to bring the project where you can see that it runs. In order to do that we presented projects in the field of sustainability and how they can work very easily. We tackled housing, heating and transportation. One of the main goals was to present this project in the web so that the people can see that it works.

What fuelled your motivation along the way?
Motivation at first was that we have gotten a lot of positive feedback from other persons. Some projects started just with some articles because the articles brought people together. They found information about new projects on our platform. So they started to work together.

Where do you get the power from?
I get my power from other people. It’s the moment when you see that people like the things that you do. If you get back positive words from all the other people you are more motivated to go on. And I also think that a general positive attitude towards things helps a lot, even if sometimes things seem to need more time.

I want to change things and I see through my work until now that this is really possible if you believe in it strongly – this is very important for me, to deeply believe. It’s like a stone which if you push, it rolls; if you only looked at it, it never rolled; you have to do something for it to roll. You can start with very simple things it must not be something big.

In all the projects which I do it’s really important to have friends and people which are involved in them. Because you can never do projects like these alone.

What are your life goals?
At the moment for me it is very important to finish my film about electric mobility. My aim is to bring information out, to inform as many people as I can reach with it, may it be the newspaper, the online portal of ökonews or the documentary that I do now. My goal is to bring information out and show that it’s possible to have a sustainable world with 100% renewable energy.

What were your biggest failures until now and what have you learned out of them?
I learned that I should not give up even if it looks bad at first. You just have to maybe wait a little bit. I learned that I was also sometimes too early with my projects – momentum is very important.

I also learned that I must give the necessary time to others; sometimes I was too quick for them. I live in a small village and 10 to 15 years ago when I started they wondered what I was talking about. In the meantime they know what I mean and they got much more informed as well. It needed time, but it’s not always simple to wait when you are in a rush wanting to achieve a lot.

Another big success for me was to have the honour to receive the environmental journalism prize together with my colleagues. It makes me really happy to see that it worked out, it was also a big boost for our work in the environmental field.

Could you tell us more about the story of the national park?
We worked about 10 years for it. We organized more than 200 information evenings for the people in the region. It needed a lot of speaking engagements in the evenings and we worked really, really hard for it. All was volunteering work. We didn’t get any money from the state or from the government.

When we started no one believed that it will work. But then with time, also with the help of other people from other national parks which came to our region and worked together with us, it happened and we changed the mind of many people. The process of changing the mind always needs time as well.

How do you know that you are doing the right thing?
I believe in my feelings and I believe in my heart. I never believe in what some other people say. When we started something which is not so conventional like ökonews, people were asking “what are you doing there?” You might think you are on the wrong path. Therefore, when you start, you have to believe in yourself and in the judgement of your own mind, not in the minds of the others.

Could you tell me what is your own recipe for success?

It’s never to give up and go your own way.

What would you personally improve in the world so it would be a better place?
It’s really important to talk together more because I think in the world today we forget sometimes to communicate. We are all busy with our daily lives, surfing the internet, we are running around and want to buy stuff. For me a tree which is growing beautifully or a flower are much more important. It is more important than to have a new iPhone, a new computer or a new car. This is what I would change in the world.

What would be your message for the viewers?

Believe in a better world.